The United Airlines public relations meltdown followed a familiar pattern as far as news coverage goes. The story first hit like a ton of bricks. That video of passenger Dr. David Dao being dragged off the plane was everywhere, but after a few days the world moved onto other stories and now new angles to the story are found buried in the paper and well into the second or third block of coverage on the TV news.

United Airlines may have learned a costly pr lesson, but I wonder if other organizations have too? How many other corporations have taken the time to look at their practices to make sure the same thing doesn't happen to them?  I'm betting it's not a lot.

Here are my 4 lessons every company should learn from United's social media meltdown.

Get Prepared For the Totally Unexpected

It doesn’t seem to make sense does it? How can you be prepared for something that hits you out of left field?

Who would have expected cellphone videos from many different angles of a bloodied, screaming passenger being carried off a plane? Or what about a story involving two girls being kicked off a flight because they were wearing leggings? It doesn’t seem to make sense, but within three weeks United Airlines had both of those stories to deal with. Obviously one hurt it a lot more than the other.

The lesson learned is because of technology (phones that can shoot video) and social media, events totally unexpected can hit any company like a ton of bricks and they need to be prepared for anything. What business leaders and communicators used to think were their pr weak spots, have been joined by a load of other possibilities, too many to count. I believe companies get so focused on the bad things they think could happen, that they’re simply unprepared for the bizarre occurrences that come out of left field. They have to become more nimble and do it in a hurry.

I’ve worked on and reviewed a number of crisis communications plans. They’re usually several pages in length and most of them have different levels to determine how serious a situation is from a pr standpoint and what action is required. As an example, when an incident occurs, you may be in the “Monitoring Phase” where you get a lay of the land to see what’s being said in social media and the general public, but don’t do anything else. Depending on what happens, the level of urgency and the response needed by the company may change.

That worked fine a decade or so ago, but not today. Look at the United situation. When most of us got up a week ago Monday, there was very little in social media. By noon, the story was everywhere. United provided a terrible response making the situation worse and things snowballed from there.

While most crisis communication plans are very clear to say that you can go from the Monitoring Phase to the Red Alert Phase immediately, CEO’s are reluctant to make the jump so quickly, in my opinion. Why go to Code Red if you don’t have to? “Let’s deal with this and see if it goes away” is the mantra.

Simply put, that no longer works. Technology and social media can take a story from 0-60 in a matter of hours and your response will be vilified on social media if it falls short of the mark.

Companies need to figure out quicker where a story is headed. Here’s my suggestion on how to help – hire veteran journalists and respect their opinion of where a story may end up. After spending 15 years in the news business, I still have a pretty good idea of a story’s impact within ten seconds if it breaking. CEO’s and some of their top aides don’t have that ability. It’s not on their DNA.

The CEO Needs to be Totally Engaged in the Communications Process

When I’m doing my keynote presentation on social media meltdowns, I normally ask my audience two questions – Who has a social media policy and a communications policy? I explain why both are needed.

After showing examples of what can, and has gone wrong, I then ask the same business leaders one more question – Are you ready if something bad would happen to your company? It’s rare that more than just a few claim they are well prepared. It’s scary.

Most corporate leaders are doing things to build their business. They’re focused on strategic planning, and overseeing sales and marketing, business development, human resource issues and delivering a quality product or service. They simply don’t spend much time making sure they and their company are prepared for a social media meltdown. Why spend time on that if it may never happen to us? We need to spend our time on things that matter today, seems to be the philosophy.

The chances of a pr nightmare occurring are higher than ever. Perhaps not to the extent of what happened to United Airlines, but what about a Facebook post from a complaining customer going viral, or video from an embarrassing workplace incident ending up on YouTube?

Business leaders need to be involved in the crisis communications planning process because chances are they’re going to be the ones speaking to the news media, their customers and the public when something happens.

Making it up on the fly isn’t a good corporate strategy.

Tell Your Story Quickly With Plain Language and Compassion

If you look at the United incident as an example, the airline made three public statements within a little over 24 hours last week. The third one, was the only one that took full responsibility for what happened and was fully apologetic.

The first United Airlines statement didn’t make a lot of sense and talked about the decision to “re-accommodate” customers which turned into a major fail. The third statement finally hit the mark. The public statements made by United's CEO Oscar Munoz are below: 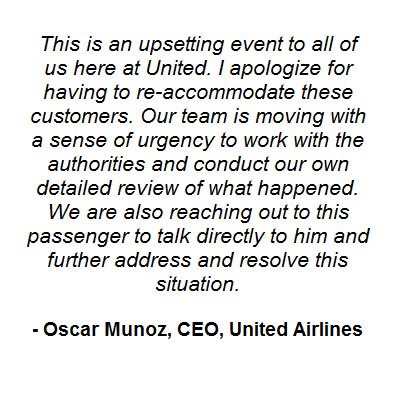 Companies need to react quickly, use the right words and tone. Releasing a statement that may only make the company’s lawyers happy is almost a sure bet to frustrate the public and lead to another round of ridicule in social media.

Traditional ways for corporations to deal with a crisis have changed dramatically. Although many of the fundamentals of crisis management are still the same, the type of incidents that occur and the speed at which they come at you, have changed the game forever. 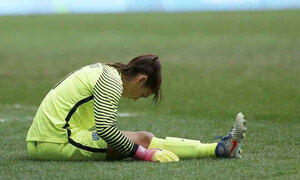