An important anniversary in Canadian radio occurred a few days ago. It was 30-years ago this past Sunday that the national radio news chain, CKO News closed its doors. I know - not only didn't you notice, but you're likely wondering what CKO was.

CKO was always run on a tight budget, but at one time it was truly Canada's first and only chain of radio news stations that closed on November 10, 1989. I remember it well because I was in radio at the same time and turned down job offers to jump ship to CKO.

In thinking back to the 1980's, Canadians were better served than ever by the radio news that was offered.  Certainly far better than we are today.

In the fall of 1983 I got the job of News and Public Affairs Director of 96 K-Lite Radio (CKRA) in Edmonton. I was only 27 years old, had been there for a little over two years and had a massive five years of experience in broadcasting.

It turned out all right though. I was there for the next nine years and have great memories about the people I worked with in that newsroom, some of whom are still in the business today, or doing other great things with their lives.

There were a total of eight of us in that FM newsroom.  Yes, eight people in an FM newsroom and I’m proud to say we did excellent work. It was certainly as good as what the AM giants of the day were doing, including CJCA, CHQT and CHED. At one time, we did five minutes of news at the top of the hour and three minutes at the bottom in morning and afternoon drive, which is more than any private AM station in Edmonton is doing these days. As far as I know, nobody on FM is doing news anymore.

We were assisted by our sister station CFCW. It had nine people in the newsroom, so combined we had a staggering 17 people in the two newsrooms! We had full-time reporters at City Hall and the Alberta Legislature.  We had two other general beat reporters, allowing us to cover any developing stories and also dug up stories of our own.

Now there’s nobody left on FM and three people at CFCW I believe. 17 people down to three. It’s rip and read on-air journalism.

In addition to our newscasts at 96 K-Lite, we also had an hour-long talk show each weekday at noon that featured everybody from politicians and book authors to celebrities and psychics. We also had a show every Sunday that also ran an hour that included four 15-minute recorded interviews that featured community issues and charitable causes.

You might be wondering why an FM radio station would have so much news and talk.  There’s a dirty little secret that existed for years.

In the 1970’s and early 80’s AM radio stations wanted the right to open FM stations because radio stations were a licence to print money in those days. They had to apply to the Canadian Radio and Telecommunications Commission (CFTC) for an FM licence and basically had to bid against each other because they knew only one or two licences would be handed out every couple of years. As a result, they made all kinds of promises about doing what was called “spoken word”, which included news and public affairs programming and announcers talking about musical artists and other topics for extended periods of time. If you remember features on certain artists where the announcer talked at length about the artist before finally playing music, that’s why. It was all done to meet licence requirements.

News and public affairs was handled the same way. The amount that was done was not driven by need or demand, but instead by promises made to the government. That’s not to suggest we didn’t do a great job, but I knew the day would come when the rules would change.

Starting in the early 90’s, radio stations were going back to the CRTC, asking for and getting reductions in spoken word commitments because of increased competition from outside sources like cable companies. The internet, satellite radio, iPods and digital downloads were all several years away.  That turned out to be the real competition.

That started the erosion of news on FM radio in Canada and to a certain extent on AM radio as well. Less news, meant fewer people were needed. Today, very little news programming exists on private FM stations in the county.

Who Gets Your Message Out Now?

While most people don’t really miss news on the FM station they listen to because they can get their information elsewhere, it has had an effect on a countless number of organizations trying to get their message out to the public.

Think for a minute about a not-for-profit association trying to inform people about a fundraising campaign or an industry association wanting to get its message across about an important change in legislation. FM radio used to be a great outlet for interviews on the news, talk shows or recorded interviews. That’s what we used to do. Now that’s all gone.

Those same organizations need to hope the remaining AM stations that do news will tell their story.  Of course, there’s always TV, although its programming budgets have been cut over the years.  Then there’s daily newspapers, but the same report now goes in both Postmedia and Sun papers. When you miss out, you strike out on both papers.

Certainly, massive news and public affair commitments on FM radio weren’t sustainable.  When station bosses had the opportunity to chop news they did, resulting in job losses.

The sad reality is, people who used to find out what was going on in their community by listening to the radio now get their information from Facebook.  In some cases what we have today isn’t better than what we had years ago.

Get My Blog and a Free Gift

If you sign up to get my blog delivered to you each week, you'll receive a free copy of my e-book Bulletproof Your Brand: What Every Media Spokesperson Needs to Know.

Hey Grant, even with all those people, you still couldn't beat "uncle Eddie. LOL 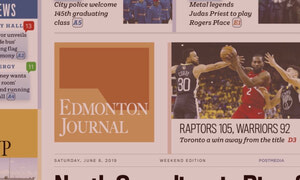