When Journalists Talk Too Much

I did thousands of interviews when I was in radio and have done thousands more as a media trainer. Some were only a couple of minutes long, while others lasted for more than half an hour.

I listen and watch interviews being done in the media differently than most people. I focus on the questions being asked and how they're asked by the interviewer, as much as what the person being interviewed is saying. I'm sure many other former journalists do the same.

Some journalists today think they're the star of the show when doing interviews. I wish they would realize they're not.

Putting a Stopwatch on Reporters

I love Twitter. I know it has its critics and there are far too many angry people on it, but there’s no better source of information for breaking news and information that’s hard to find anywhere else.

Last week as I was scrolling Twitter I found a great example. There was a post from Aryn Toombs of Calgary (@ArynToombs). I suggest you give Aryn a follow. He has produced a series of informative graphs to track the spread of COVID, especially in schools. 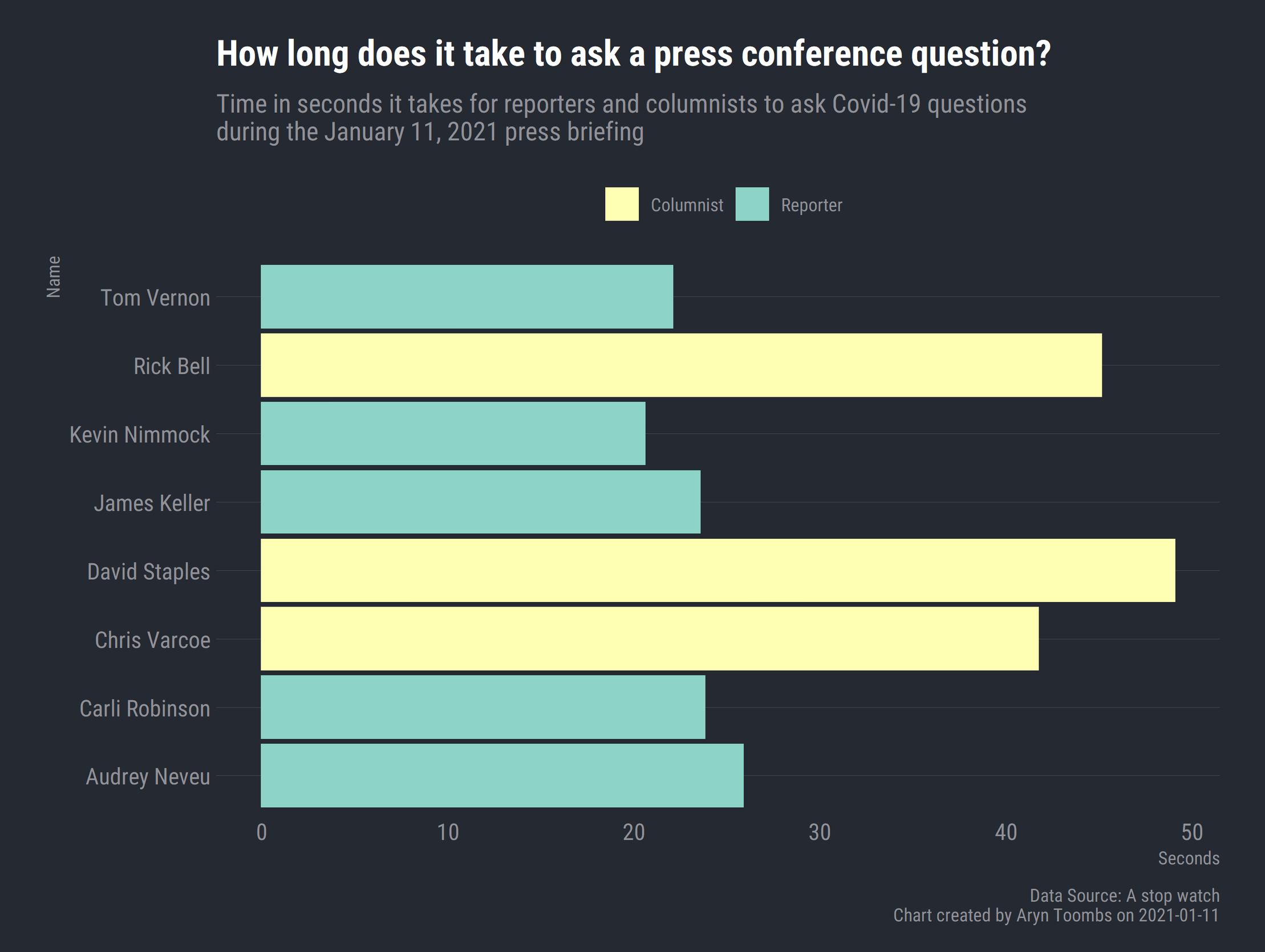 The Question That Never Ends

I guess it would stand to reason that columnists ask longer questions. After all, they’re paid to express their opinions. Reporters are supposed to just stick to the facts.

There are two reasons I found Aryn’s chart so interesting. As somebody who has done thousands of interviews, I’m ready to pull my hair out when I listen to some people do interviews on radio, or watch some journalists on TV.

When I was in radio, I remember somebody saying the job of a good interviewer is to ask questions that you think most people would want to have asked and perhaps more importantly, always make the guest the star of the show.

So many people today don’t understand that. I have heard journalists, especially a few doing sports talk radio, go on forever with their questions. On far too many occasions, the interviewer will ask a question, but then quickly move to a statement to explain the question, ask a similar question as the first one, make another statement and finally ask a question that requires a response. No word of a lie, I have heard “questions” go on for close to a minute.

How does this make the guest the star of the interview? When the questions are longer than the answers, it’s typically not a good interview.

A good question can be extremely short. Sometimes the best question is only one word - “Why?”

When I hear a journalist ask a really long question with a ton of explanation, I feel sorry for the person being interviewed. At televised news conferences you can see the politician is ready to give an answer as soon as the reporter finally shuts up.

This brings me to the almost-daily COVID updates that have been done in Alberta, and several other provinces, for the past ten months.

Reporters ask questions over the phone and they’re answered by people like Kenney, Shandro and Dr. Hinshaw, who are in an empty room. This has created a very different dynamic.

Before the pandemic, clips from anyone speaking at the news conference were used on TV newscasts and questions from reporters were rarely included. That’s all changed because the entire news conference, including questions from reporters are streamed live on the internet and sometimes live on CTV’s and CBC’s 24-hour news channels. When there’s been a major announcement to make, such as new restrictions, over 40,000 people have been watching the livesteam over YouTube. Thousands more were watching on TV.

Reporters and columnists know this. They also know they have one shot at asking a question because they won’t get to ask a second one. As you can see from Aryn’s chart, some journalists like to hear their own voice.

50 seconds to ask a question? Please.

No wonder Kenney said one reporter’s question sounded like something he would hear from the NDP in the legislature. There’s no doubt some journalists know their question is part of the livestream and they’re grandstanding.

They should stop doing it. If anyone wants to hear what a columnist thinks about the issue, they can read about it in their column. Going on too long at a news conference to make your point is awkward, rude and unprofessional.

You're paid to report the news or comment on it, not to make it.

Hi Grant,
Thanks for this article. It inspired me to write on my blog about the type of mistakes made during radio radio interviews that managers should avoid when conducting hiring interview if they want to select the right person to fill their vacancy. 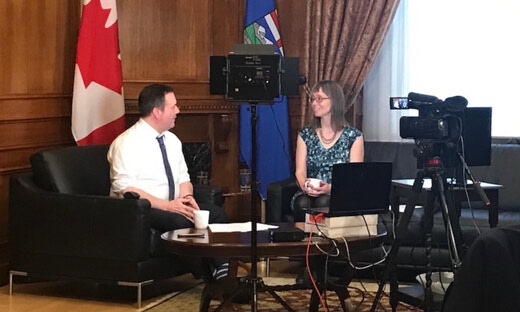